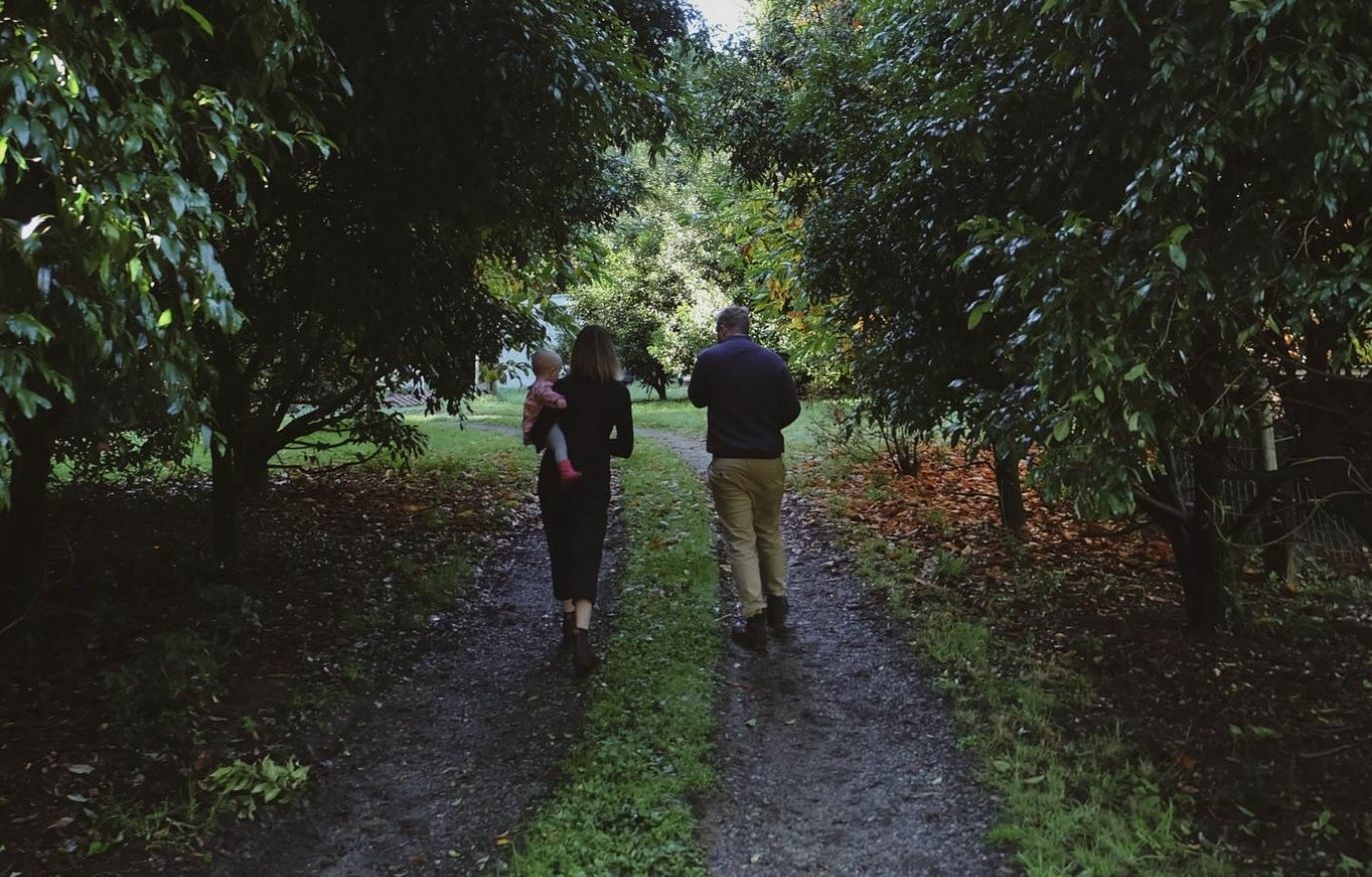 It was the distinct beauty of Gippsland that seduced Jessica and James away from life in a major city, making the thousand-kilometre passage to Ferndale from inner-city Sydney.

Experience the abundant, off-grid home of a young winemaking family in West Gippsland.

Where are we: Ferndale, Baw Baw Shire.

The distinct beauty of Gippsland has the ability to seduce and lure you away from life in a major city. So strong was this pull that former inner-city Sydney dwellers Jessica Martin and James Audas made the thousand-kilometre passage to Ferndale, West Gippsland, and have not looked back.

Ferndale is positioned in the Strzelecki Ranges, at the juncture of rolling agricultural hills, state park bushland and plantation forestry. There’s no better indication of this diverse landscape than the roadblocks I encountered on my drive to the property: several roaming steers, a mob of kangaroos and a company of fleetly Eastern Ground Parrots. As the distinguished call of a lyrebird greeted me at the end of the driveway,

I immediately understood why Jessica Martin and James Audas described their home as ‘tranquil’.

After visiting Gippsland to work alongside local winemaker William Downie and learn about viticulture, the couple were won over by the sense of community, the places and the produce of the region.

Chestnut, macadamia and avocado trees line the driveway as I weave towards their home. The garden has an abundant and overlapping arrangement, with the kind of informal organisation synonymous with the permaculture approach: poultry hutches are dotted amongst orchards, fruiting and native cultivars share zones alongside veggie beds to aid companion planting. There is a fishpond that forms part of the kitchen garden’s fence, which also doubles as a trellis for climbing vegetables.

Jessica and James moved to Ferndale in 2017 into an off-grid, passive-solar farmlet. Established in 2004, the property was originally developed around the principles of permaculture and has since flourished into a rambling food forest.

A family of three since the arrival of their daughter, Freya, early last year, the family have well and truly put down their roots in West Gippsland. Jessica is the general manager of renowned Warragul restaurant Hogget Kitchen and one-half of the couple’s wine label A.R.C Wines (A.R.C standing for ‘A Random Collection’). James, of course, makes up the other half of A.R.C and is also the owner of Lo-Fi Wines, an Australian-based wine importer and distributor.

The house itself has all the indicative signs of considered, passive building design: northern orientation, floor-to-ceiling performance glazing on the northern façade, open plan living spaces with a central wood stove, and deciduous trees around the house that provide sun protection or exposure at the right times of the year.These are the kind of simple, but incredibly valuable, building design decisions that result in low running costs and minimal environmental impact.

Jessica and James love the way their home communicates with the Gippsland landscape, and describe the outdoor living space as their favourite. Roofed by an ornamental grapevine that visually connects the indoors to the kitchen garden and the native gums beyond, it is the perfect place to watch the sunset and savour the view toward French Island.

The family have wholeheartedly taken on the role of custodians to this regenerative property, building on the integrity of the original vision by further caretaking of animals and planting perennials. 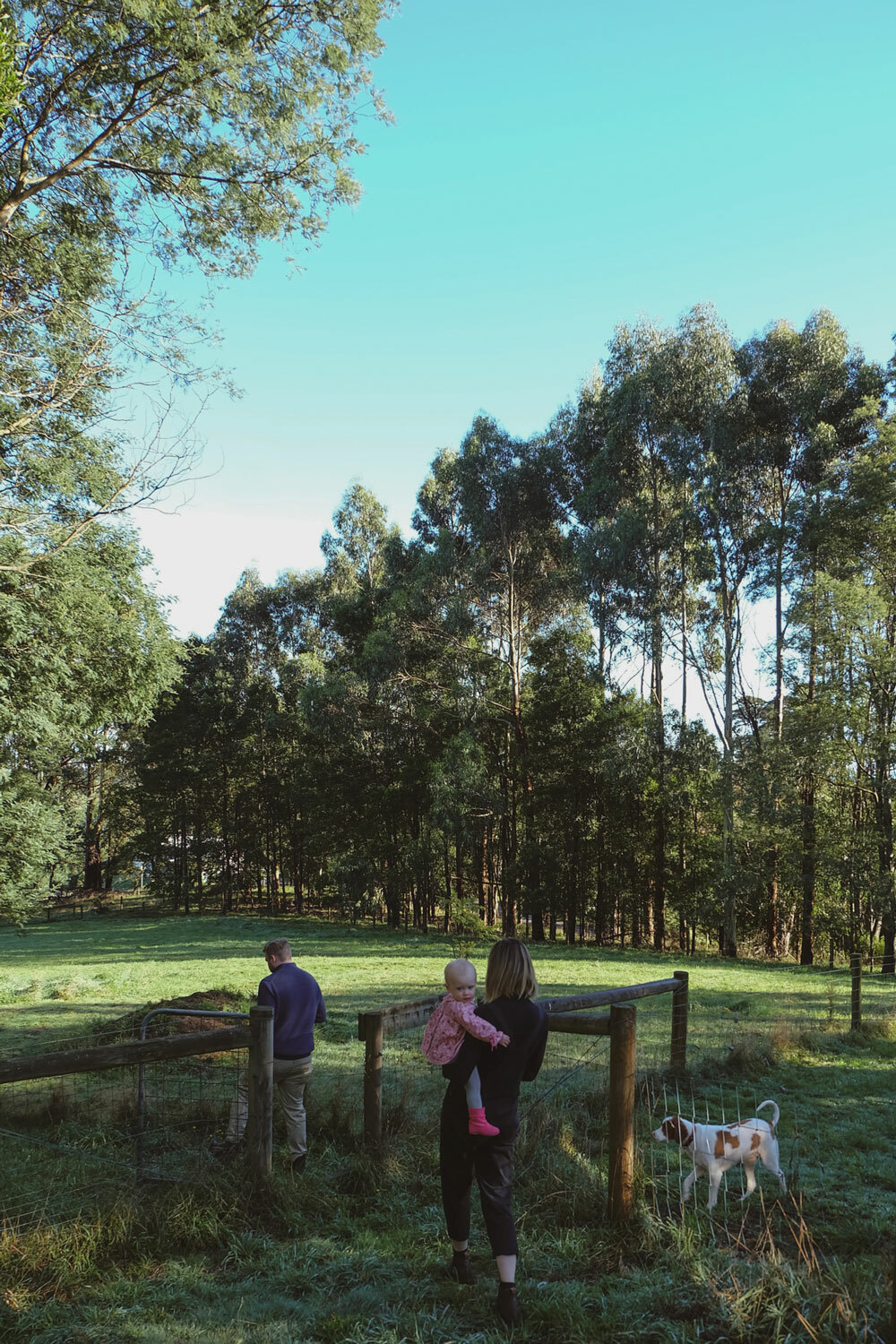 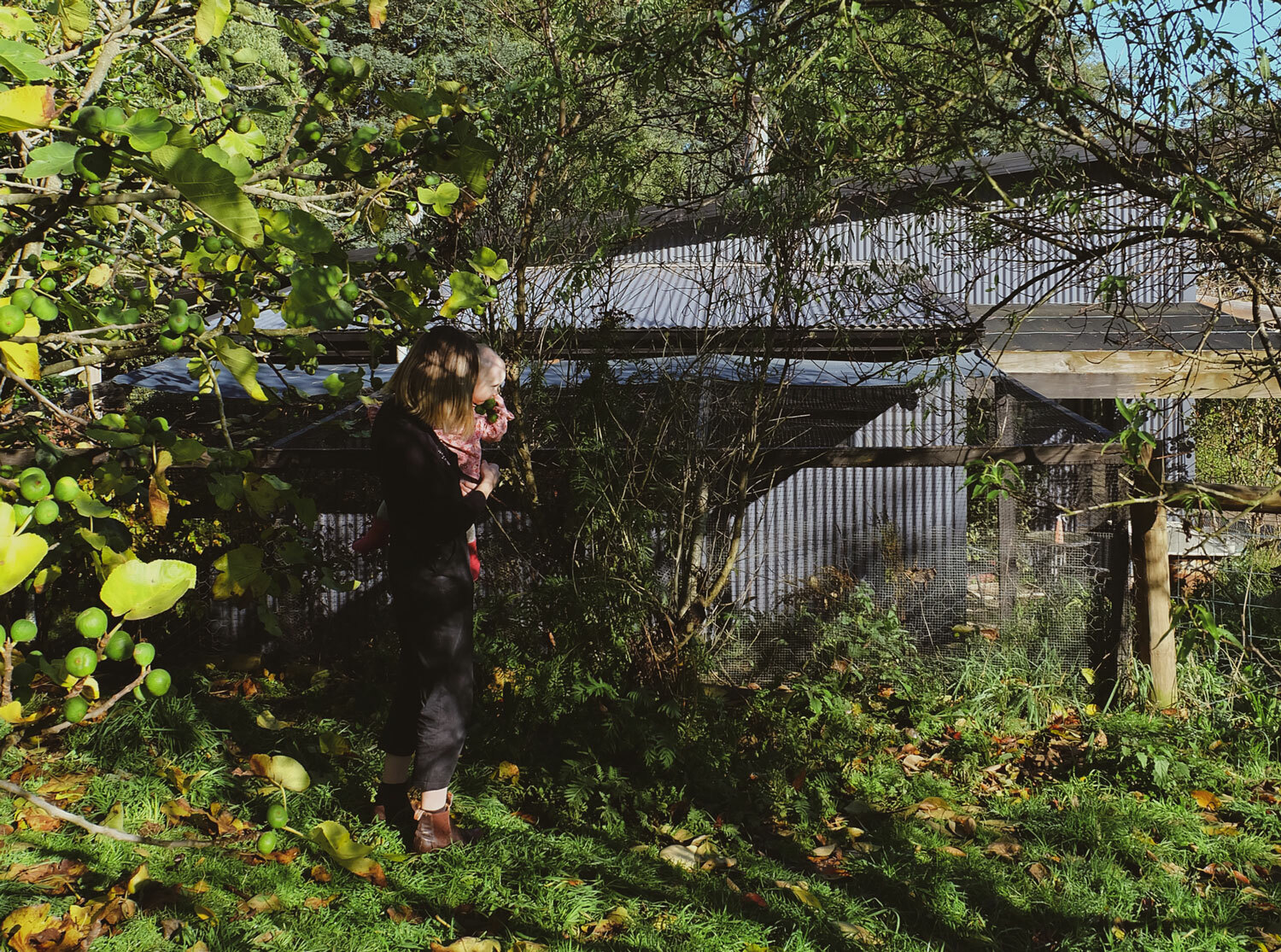 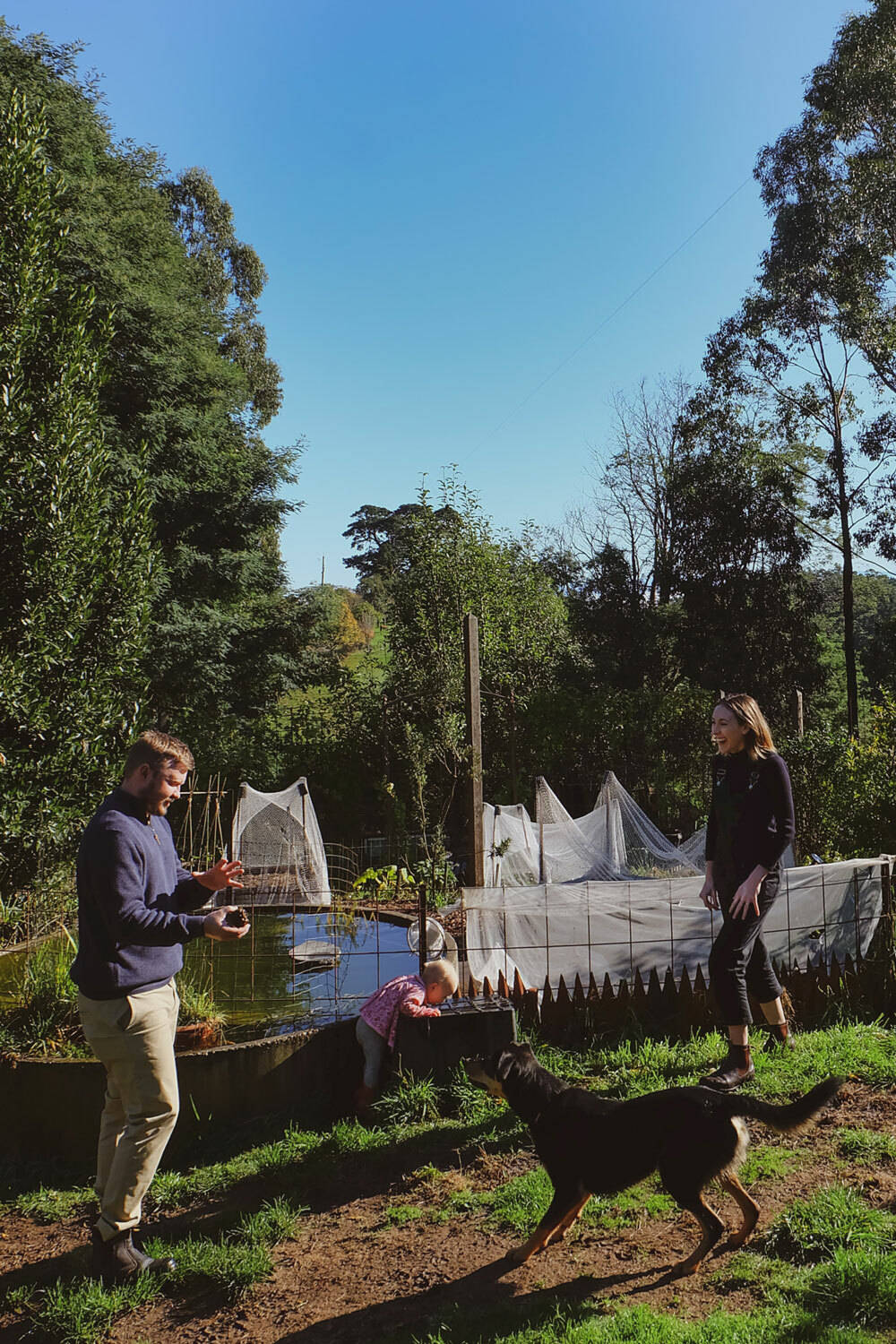 A holistic mindset extends to the work undertaken by this family for their wine label A.R.C. The minimal intervention wines made by the duo work with wild yeasts and biodynamic grapes, and are bottled unfiltered and unrefined. With plans to set up a biodiverse vineyard on the property, the end goal is to grow all of their own fruit under organic principals.

The seven-acre property provides the mental and physical space that allows Jessica and James to work from home. The pair have had to adapt to living and working regionally and off-grid by using powered appliances only when the sun is shining, and limiting the use of streaming media and electronic devices in order to maximise efficiency. They describe this as a challenge, particularly after the Covid-19 restrictions resulted in an estimated 90 per cent loss of their wholesale business due to the closure of dine-in restaurants. For their businesses, this resulted in the diversion of operations to refocus on engaging customers via social media and cultivating a retail presence.

Although facing devastating circumstances, as described by Jessica and James, the family have soaked up time together on the farm, knocking over jobs and tending to the kitchen garden. And what a place to be self-isolating.

As we near the end of our walk through the garden, empty coffee mugs in hand, I observe a family genuinely content to be in this part of the world. Their relaxed and matter-of-fact dynamic is refreshing, and I know this is a family that approaches life with a calm clarity, and they get things done. Freya is so fortunate to have such a playground to grow up in, even though she attempts to drink from the fishpond as we wrap up our time together.